BIG TREES OF SEATTLE PART II
CHARLES MUDEDE
Before describing an amazingly big tree that is not too far from where I live in the Central District, I would like to discuss for a moment the wholeness of big trees. This rather lengthy quote from the famous preface to Hegel’s The Phenomenology of Mind will assist my brief thoughts on the wholeness or, to borrow an expression from Walt Whitman, the most Hegelian poet, the allness of big trees. (Wholeness is too healthy a word for my purposes, whereas allness has the goodness of wholeness in it, as well as the heavy dread of it’s near double in sound, awfulness—Satre’s protagonist feels this awfulness in allness when he is overwhelmed by the details of a big tree in a park near the middle of the novel Nausea).

Hegel writes: “When we want to see an oak with all its vigour of trunk, its spreading branches, and mass of foliage, we are not satisfied to be shown an acorn instead. In the same way science, the crowning glory of a spiritual world, is not found complete in its initial stages. The beginning of the new spirit is the outcome of a widespread revolution in manifold forms of spiritual culture; it is the reward which comes after a chequered and devious course of development, and after much struggle and effort. It is a whole which, after running its course and laying bare all its content, returns again to itself ; it is the resultant abstract notion of the whole…”

A big tree is a total event. Hegel’s seed, a blade of Pascal’s grass, a boy’s tricycle—these and many other things do not give us a sense of being complete, being One. Because it has so much life in it and on it, and because it branches out in every direction, and has thousands of leaves gathering sunlight, and thick roots absorbing minerals, the event of a big tree—an event in Alfred North Whitehead’s sense: “An event is the grasping into unity of pattern of aspects,” Science and the Modern World —is the most compelling representation of being total, being “that something [that] is the all, and the idea of all, with the accompanying idea of eternity, and of itself, the soul, buoyant, indestructible…” (Walt Whitman).

Hegel, the most ambitious thinker in the history of Western philosophy, saw in the big tree (“with all its vigour of trunk, its spreading branches, and mass of foliage”) what he wanted his philosophy to become—a system of thought that contained all of the stages of its thought’s development, right up to the present moment. Hegel wanted it all. Nothing in the world should be a mystery, or alien, or buried in the earth, ignorant of the sun, the notion. Such an enterprise sounds amazing (or simply insane) to our age of cultural relativism and postmodern decenteredness. The subterranean rhizeme instead of the big tree is the plant life that best represents the mood of our unprepossessing age. 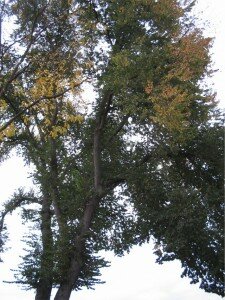 The featured tree for the present installment of the Big Trees of Seattle is in the yard of a home on Jackson and 38th. The tree rises up into the sky and looms over a curving street. It is a beautiful tree in a beautiful setting. The house is old and handsome and looks out at a valley of other homes and trees. Lake Washington and Mt Rainier are in the distance. Rumor has it that a pair of rabid squirrels once ran down this tree and bit some girls at a birthday party. Like Hegel’s philosophy, good and bad things have come down from this very big tree.